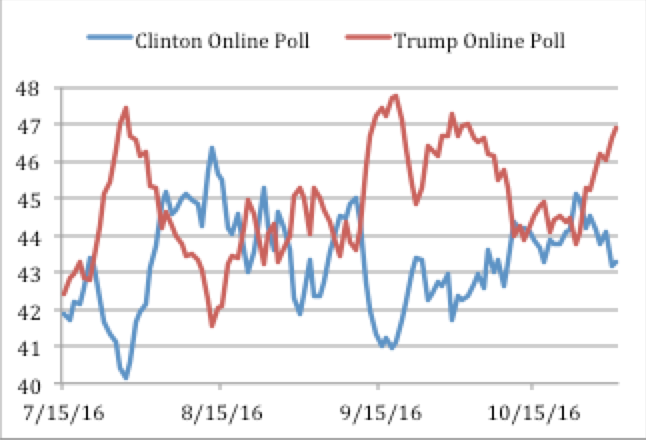 Plenty has been written about prediction errors in the traditional polls for last week’s US presidential election. Besides sampling, social desirability bias in answering pollsters is a key suspect in explaining why Donald Trump got more votes than predicted. We share this intuition comparing the traditional phone polls – which had Clinton ahead by up to 5 points, with the above USC/LA Times online poll, which had Trump ahead most often and in the weeks before the election. This poll differs from others in several ways, including probability voting, and importantly “is internet-based as studies have indicated that people are sometimes more honest about their voting preferences when completing internet surveys than they are in phone surveys.” http://news.usc.edu/109339/why-the-usc-dornsifel-a-times-presidential-poll-is-unlike-other-polls/

Can we analyze these data to explain how candidate’s social media efforts and statements have different impact depending on which poll we use? Raoul Kubler collected daily data on donations, Facebook Likes and Engagement, while Ginger Pennington coded each candidate’s Facebook posts by elements (e.g. photo, video), links to sources (Breitbart, Fox, NY Times), use of language (e.g. I, you, authentic, gender), emotions (e.g. achieve, anger, sad), temporal focus (past, present, future), and morality (e.g. fighting for or against authority links to sources.

Opposite effects of these explanatory variables appear when I regress traditional poll and the online poll on a select 7 variables (explanatory power of 0.87 for Trump and 0.81 for Clinton). Trump’s Facebook Engagement and use of Authentic language showed a negative impact on traditional polls, but a positive impact on the online poll. Facebook Likes, the use of ‘You’ and ‘Money’ and arguing against Authority had similar positive effects on Trump’s traditional and online poll numbers. 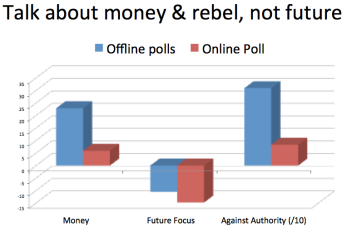 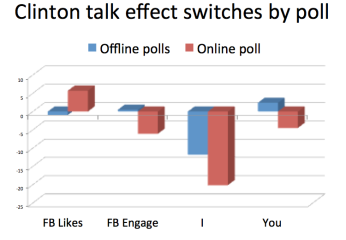 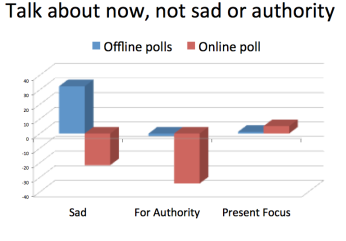 What have we learned? The Trump campaign successfully increased Facebook Likes and Engagement, using ‘You’ and ‘Authentic’ language and talking about money and against Authority. And polling will need to be rethought when social desirability bias is strong.

Scroll down the page to comment on this blog!